Tickets Priced at 199 flux per pax

Capture The Flag
Make your way to the Mid-Point or Enemy Territory to grab the Flags and Capture them in your base to secure Points.             (1 and 3 Points respectively)

Team Death Match
Kill as many foes within the specific time period to secure points for your team and lead your team into victory!!(not supported IRL)

Arena Information:
This Arena comprises of 2 towers each for both The Red Team and The Blue Team 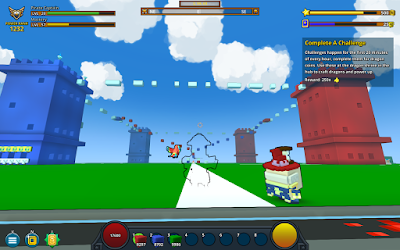 All Towers give a panoramic view of the whole Arena. This ensures one to be able to see their foe from the distance. These towers also acts as a platform to surprise your enemies from above where they least expect their foe to appear.

Spawn Points for each team are located either at the centre of the Arena, at the base of the towers, at the top of those towers or next to the Team Flags

Both of Paths have been tweaked to increase the difficulty to capture the flag. One needs to Parkour to the Capture Point with added Spikes and icy floors for the paths from the Mid-Point and The Towers respectively.
For More Information, Please Contact MBC at i.g.a.zxz@gmail.com or find Anthonykung in Trove.


Get it for Life-time free entry and free IGA shipping code included. Only 48 on sale get it NOW!